An inappropriately high blood pressure within the arteries (and veins) can lead to damage to the lining of these vessels and this can lead to leakages, tortuosity as well as deposits of unwanted material in their walls. This consequently leads to malfunction of various organs or tissues where this damaged vessel is supplying blood. This damage occurs gradually and usually silently over period of months and years.

Organs and Affects of Hypertension

High blood pressure per say does not cause any symptoms. Symptoms commonly occur once hypertension has caused malfunction or damage to one of the body’s organs. Thus, Hypertension is also commonly referred to as ‘The silent Killer’. In less than 10% of hypertensive patients, a raised blood pressure may cause a headache at the back side of the head called Occipital headache. Unlike the common belief there is no scientific evidence that the common central or headaches involving the side of head is related to increased blood pressure. However, all headaches, or for that matter any physical or mental discomfort will cause the patients baseline blood pressure to rise. This reactive rise in blood pressure does not neccassarily pose any danger to health and does not necessarily need adjustment of the patient’s regular blood pressure medication.

Hypertension may be defined as “a sustained increase in the blood pressure which is inappropriate for that particular patient and if not controlled may cause damage to one or more organs or tissues of the body”. Over the last 50 years the absolute levels at which patient is diagnosed as ‘Hypertensive’ has kept on changing. This has resulted from dynamic scientific research and data which has confirmed that there is no absolute single level above which blood pressure is safe. This ‘unsafe’ level is dependent on the age, the patient’s comorbid conditions and particularly the clinical scenario. e.g., an average BP profile of 140/80 in a 6-month pregnant 26-year-old may be considered dangerously high compared to a 60-year-old man with no other comorbid condition. The exact level of a safe blood pressure control is, therefore, best determined by a physician trained in Cardiovascular medicine. Generally, people with average BP profile of less than 120/80 are considered as ‘Normotensive’.

As baseline and to look for end organ effect of Left ventricular hypertrophy , silent ischaemic heart disease or electrophysiological disturbance or abnormality

Urea , creatinine and electrolytes to look for kidney function

Under special circumstances other more advanced or specific tests may be asked for to ascertain the cause, delineate damage or monitor therapy. These may include fundoscopy, 24 hour urine collection, Renal ultrasound, Renal artery duplex or angiogram, CT or MRI scan of abdomen or chest, Ultrasound and doppler of the leg vessels or other special blood tests

Any part of the body can be affected by uncontrolled or poorly treated Hypertension. However not all people are affected equally with some having only minor effects with very poor control while others may have very severe and life threatening complications even with mild hypertension. This unpredictibility is related to ones genetic predisposition as well as other predisposing risk factors for Cardiovascular disease like diabetes , dyslipidemia , obesity and smoking. So in general the more risk factors are present with Hypertension in a particular patient, the more chances of having complications and thus the need for more intense monitoring and control of daily BP in that person.

The most commonly seen sequelae of poorly controlled hypertension in Pakistan are:

This manifests itself in a variety of symptoms ranging from non specific weakness and lethargy to severe breathlessness with swelling of the whole body. It is most commonly diagnosed by testing blood for Urea, Creatinine and electrolytes on a background of clinical suspicion.

This is most commonly diagnosed by investigating complains of shortness of breath accompanied usually by swelling of feet. Diagnosis is usually confirmed by an echocardiogram (a special ultrasound of the heart). This is a very common and serious complication, as once a person shows signs of heart failure , his / her quality and quantity of life are both adversly affected. Thus it is very important that heart failure is prevented, diagnosed early and treated appropriately and effectively.

A very devastating and most feared complication of hypertension. It presents in a variety of signs ranging from memory deterioration, recurrent headaches , localised muscle weakness , transient visual loss, paralysis of part or whole parts of body or sudden loss of conciousness to the extreme complication of sudden death.

Hypertension may affect the blood vessels at the back part of the eye called retina and may lead to decrease in visual acuity and even visual loss due to retinal haemmorhage. A simple eye examination called ‘Fundoscopy’ by the physician or eye specialist may detect and treat this complication before it affects the eyesight.

This is the term used for hardening and damage of the blood vessels. The most common manifestation of this complication is seen as exertional chest or leg pain known as ‘Angina’ or ‘leg claudication’ and in advanced cases resting severe chest pain due to ‘myocardial infaction’ commonly known as a heart attack.

Lifestyle modification (Nonpharmacological Treatment)- is an integral part of all Cardiovascular risk modification treatment and consists of:

Pharmacotherapy (Drug Therapy) is indicated when lifestyle modification does not work or when there is evidence of target organ damage on clinical or other examination in a patient diagnosed as Hypertensive.

The usual classes of drugs used in treating Hypertension in Pakistan are: 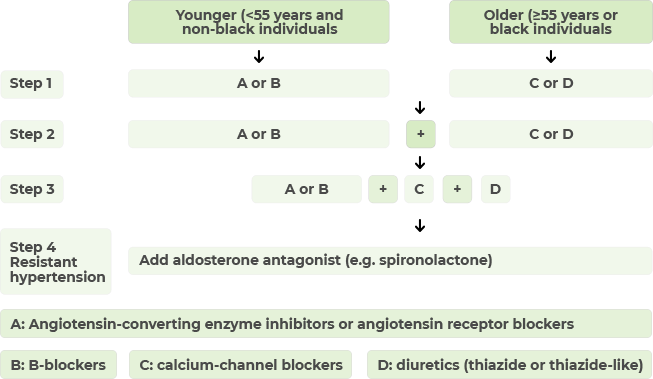